Both the flying mammals and dolphins have a natural biosonar which they use for orientation and hunting: they emit ultrasound, which is inaudible to humans, and then pick up its reflection (echo) from the surrounding objects. Thus they perceive the shape and position of objects. Bats are not blind but still their ability to navigate perfectly in total darkness comes from this method, called “echolocation”. 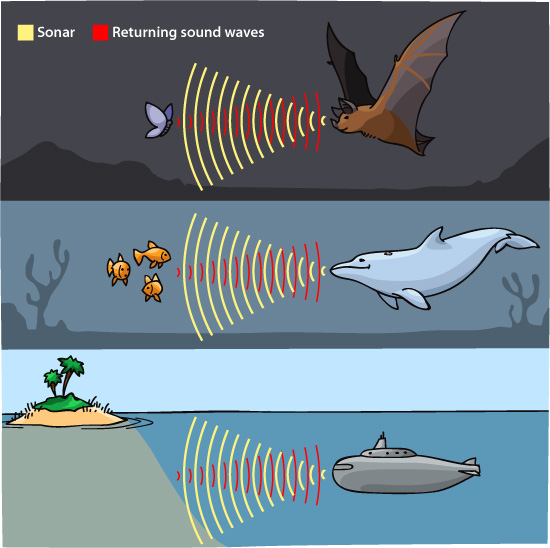 In order to locate their prey, bats emit ultrasound which is imperceptible to the human ear, as it crosses its frequency threshold – humans can hear only sounds between 20 and 20 000 Hz (20 kHz); sounds emitted by bats, on the other hand, may exceed 100 000 Hz (100 kHz)!

Some species of insects, however, are capable of hearing the ultrasound used by bats; they can save themselves from becoming dinner for the flying mammals. Among them are some beetles, crickets and moths.

Apart from bats and dolphins whales, some species of shrews and some birds use echolocation too. Several species of swallows in South America and Southeast Asia live in cave entrances; there they emit specific sounds – perceptible by man – which help them locate their nests in pitch darkness.

Echolocation, however, can be applied successfully only within a 20-metre range. All species of bats have well-developed eyesight and can memorize in detail the objects and landscape of the territory in which they live. This allows them to navigate perfectly in the dark. They are able to locate an object measuring just 0.05 milimetres in total darkness!