The probability of a bat attack equals that of you becoming the next meal of Count Dracula’s! All European bat species feed on insects with the exception of the Egyptian fruit bat which is found on the island of Cyprus. Only 3 out of more than 1200 species of hand-winged mammals in the world feed on blood, and they all live in South and Central America. 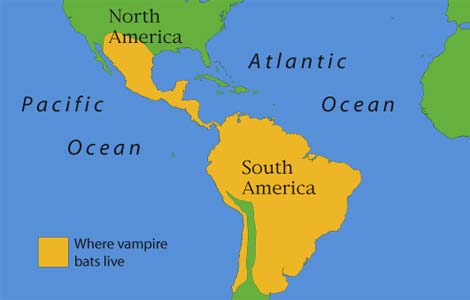 There are about 1200 species of bats on planet Earth. Almost 70% of them are insect-eaters, and the rest feed mainly on fruit and flower nectar. Less than 1% of the flying mammals worldwide include small vertebrates in their diet – fish, frogs, lizards, small birds and sometimes even smaller species of bats.

In this huge diversity of species with varying diets three bats from Mexico and Central and South America have become perhaps the most famous ones due to their feeding habits: the vampire bats.

Fans of Count Dracula might be disappointed, however, as vampire bats do not bite their prey on the neck and do not drain its blood to death. They bite their victim while it sleeps; the bite is painless and the victim rarely wakens even while the bats are feeding.

The vampire bat makes a small incision in the skin of its prey at a spot where the blood vessels are close to its surface. Then the bat starts licking the blood that comes out of the wound. Its saliva contains a compound that inhibits blood clotting and thus the bat keeps feeding on the drops of blood coming out of the wound.

→ Only one of the three species of vampire bats in the world feeds on mammal blood (mainly cattle, goats and swine) – the common vampire bat (Desmodus rotundus)! The remaining two species feed on the blood of large birds.

→ Vampire bats have a wing span of 40 cm, and their weight varies between 15 and 50 grams. However, their total body length rarely exceeds 9 cm!

→ Usually two tablespoonfuls of blood – approximately 30 grams – are more than enough to satisfy the appetite of the vampire bat!

→ Recently scientists use the compounds in the saliva of vampire bats as a basis for medicaments aimed at blood clotting conditions which could save the lives of many. The bat compound is 150 times stronger than all existing medicaments on the market.

→ Blood contains about 90% water and is not nutritious enough. Therefore if a vampire bat fails to feed for more than two days, it would starve to death. After coming back to their colony, vampires often share their food with fellow bats that didn’t manage to find food. Such an act of mutual commitment is very rare in nature!

→ Female vampire bats are among the most caring parents in the order Chiroptera. Mothers take care of vampire baby-bats up to 7 months after their birth while other bat species do so for only about 2 months before their young are old enough to fly and hunt on their own.